History of the Mercer County Jail 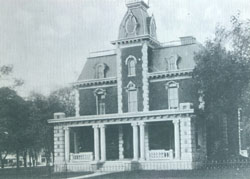 On December 29, 1825, the County Commissioners awarded Asa Hinkle a contract to build the first Mercer County Jail.  In exchange, Mr. Hinkle received lots 31, 34, 37, 42, and 50, and also $150 in cash, with the settlement taking place on June 6, 1830.  In 1833, the Jail was repaired by covering the door inside with sheet iron using large headed wrought iron nails, set four inches apart.

On July 1, 1842, a contract for a new jail was awarded to Gustavus Darnold.  The jail, to be finished September 28, 1842, at a cost of $397, was partially paid in town lots.  On March 4, 1849, the Commissioners ordered an addition to the Jail and debtor's room (a frame building) and awarded a $630 contract to H.L. Johnson. Contracts for plastering and ironwork were awarded to Levi Lips and Hezekiah Trenary, respectively.

On January 11, 1860, Valeau & Jacobs of Cincinnati, Ohio, received a contract to build a Sheriff's residence on the northeast corner of the Public Square for $5000.  Plans called for a 38-foot 6-inch by 29-foot structure with a 22-foot 8-1/2 inch elevation to the top of the cornice. The structure was to be built of bricks with a stone foundation and covered with sheet iron.

In the spring of 1875, the Commissioners awarded a $25,000 contract to E.W. Wilson, Van Wert, Ohio, to construct a new County Jail and Sheriff's Residence according to the plans and specifications of T.J. Toland & Son, Delphos, Ohio. On March 8, 1876, the Commissioners ordered the Jail heated with steam and awarded a $935 contract to C. Buehler & Company, St. Marys, Ohio. 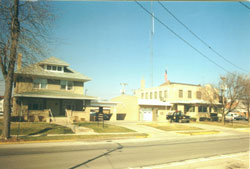 The old Jail was located at 125 W. Livingston St. in Celina.  It was constructed in 1939 and cost approximately $41,000 of which Mercer County paid $23,000 with the balance paid with a federal grant from the Public Works Administration Program.  Sheriff L.M. Davis moved into the Jail and Residence on August 4, 1939.  On August 25, 1939, the old Jail on Courthouse Square was sold for $51 to Shartzer Wrecking & Excavating, Dayton, Ohio.  Henry Lechner, Daniel Moeller, and A.E. Morrow were County Commissioners at this time.

Two major renovations/additions occurred at the old Jail and Residence. In 1966, an enclosed entrance ramp was added to the rear of the Jail and an enclosed porch to the residence. The largest addition/renovation occurred in 1973 when Sheriff W.C Sunderhaus moved from the residence and the residence was converted to office space, holding cells, and a larger radio control room. A drive-through garage was attached to the west of the old Jail, adding security in transferring prisoners from cars. This addition/renovation totaled approximately $162,000 and was funded with a federal grant from the Law Enforcement Assistance Administration which covered 50% of the cost.

In April 1985, due to limited office space in the Jail, the County Commissioners purchased the Bair home, west of the old Jail's location. Known as the Jail Annex, this structure contained the Sheriff's Administrative, Enforcement, Civil, and Detective Divisions until January 2010.

In November of 2007, the voters of Mercer County passed a .5% sales tax to construct a new jail and sheriff's office at a cost of $12,000,000.  Construction for the facility, which is located at 4835 State Route 29, was completed in November of 2009.  Architects for the project were Shremshock Architects of Westerville, with general contractors being Peterson Construction of Wapakoneta.  Plumbing, electrical and HVAC contractors were Ohio Plumbing of Coldwater, Sidney Electric and GM Mechanical of Covington, respectively.

On January 4, 2010 administration and dispatch moved into the new Mercer County Detention Facility, with prisoners and corrections staff following on February 28, 2010.